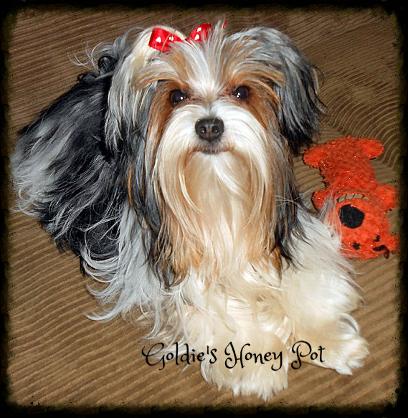 The Biewer was created in 1984 by a Mr. & Mrs. Biewer of Germany, when they cross bred two of their Yorkies. Biewer's were introduced to the United States in 2003, and today they're still considered to be a rare breed.

The Biewer Terrier came to be it's own breed as a result of a Yorkshire Terrier puppy born in January of 1984 that had an extreme amount of white patterning throughout it's coat. This unusual puppy, named Scheefloeckchan von Friedheck, caused his breeders, Werner & Gertrud Biewer, to wonder whether their Yorkies carried a recessive Piebald Gene, which apparently they did.

Over the next several years, the Biewer's bred for the Piebald Gene & produced Blue, White & Gold Yorkshire Terrier's that bred true to their color. Mr Biewer showed two of his unusual dogs as "Black & White Yorkies" in 1988, & the breed took off from there. Biewer Terrier's were first officially recognized by the Allgemeiner Club der Hundefreunde Deutschland e. V., one of Germany's dog clubs. The Biewer's signed off on the Biewer breed standard in the late 1980's. Mr. Biewer died in 1997; thereafter, his widow stopped breeding dogs. The Biewer Terrier Club of America was established in 2007.

The average Biewer weighs between 4 to 8 lbs & stands up to 8 1/2 inches in height. Their single coat is long, straight & silky & comes in White/Blue/Black & White /Gold/Tan. It requires regular attention to keep it tangle free, much like human hair. These tiny Terrier's are reported to be happy-hearted & almost child-like, & they make extraordinary companions in large or small households. The Biewer Yorkie does well with children & other animals & bonds closely with it's human family. These are playful, mischievous little dogs. Despite their small stature, they're sturdy, active & alert. They are not known to be yappy barkers.